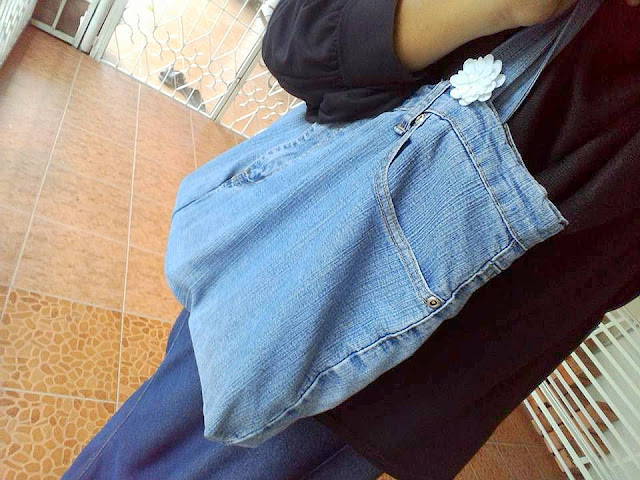 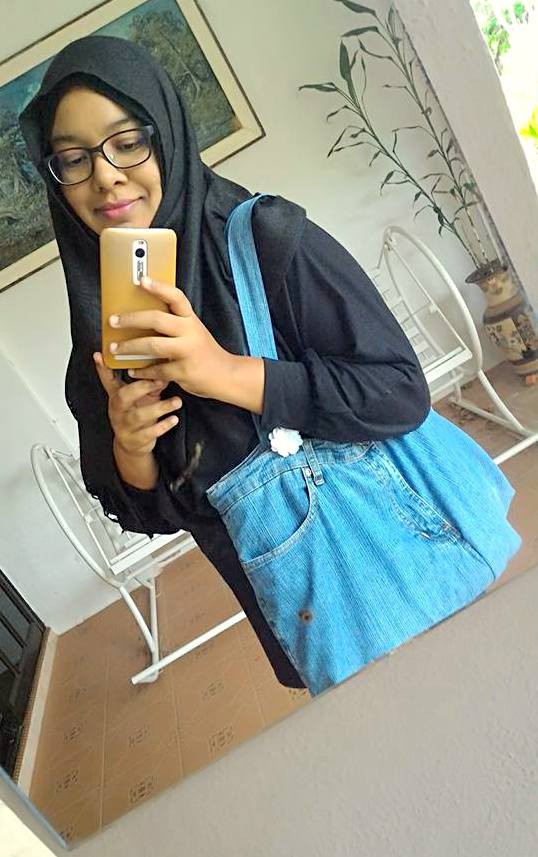 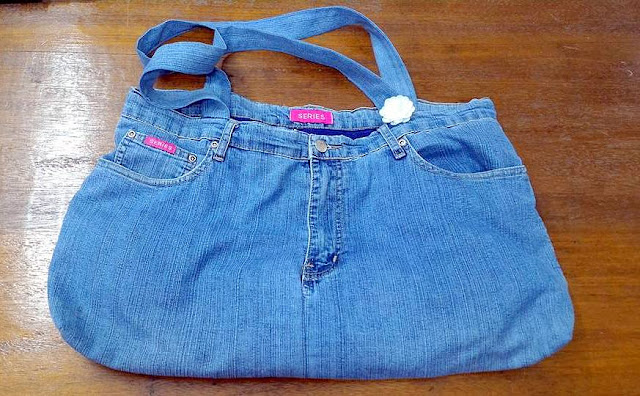 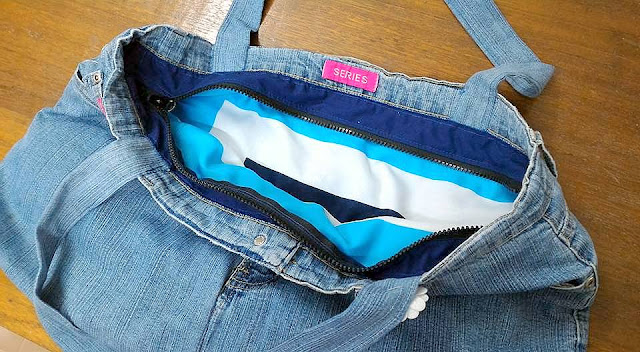 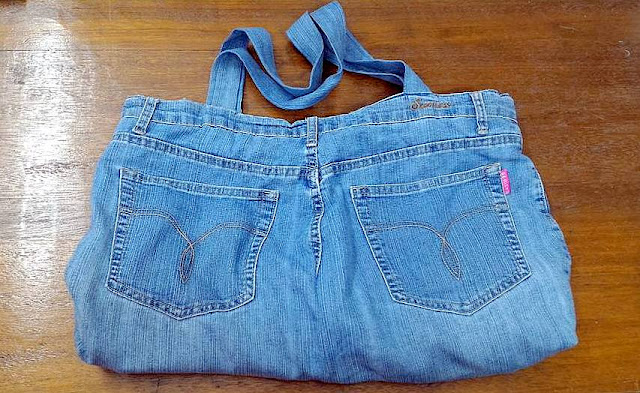 Hi guys!! Today's post is all about recycling my old pair of jeans. Actually I have two pairs that needs recycling. Can't give them away to the needy because they are not in good condition. Who would want to wear them anyways right? They are not wearable anymore. But even though they are unwearable, I am really reluctant to throw them away because I love the material so much. Besides, there are dozens of ideas on the net that I can Google to find about what I can do with old worn out jeans.

I've seen images on Google and also on Pinterest before of old jeans turned into simple jeans bag many years ago. Back then I never thought that they were something that sewing beginners like me can do. So recently I decided to give it a go after watching a few tutorials on YouTube on how to make simple jeans bag. I dusted my old Singer sewing machine and started the jeans bag project. 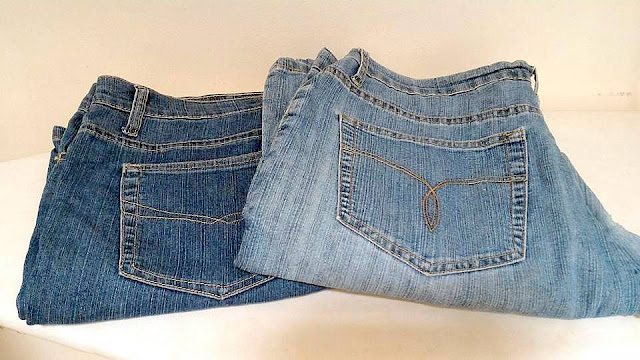 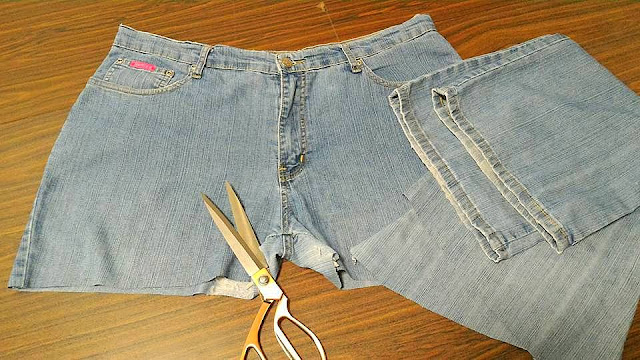 For the first try, I decided to use the oldest pair between the two that I owned because I might make mistakes the first time. So if I use the worst one for my first try, which is the one that is light blue in colour then I won't feel so bad if I ruined it HAHAHA!!! Actually to be honest I would still feel bad if it didn't work out because I love both of them.

To make the jeans bag, I don't actually need to use the whole jeans. As you can see from my photos here, you'll get the idea how it's done. To make the bag, you can hand sew it if you don't have a sewing machine. But I decided to use both hand sewing and the sewing machine, depending on which part of the bag I need to sew. Because there are parts of the bag that is impossible for me to use the machine. Especially when trying to sew the handles to the bag and also the zipper. 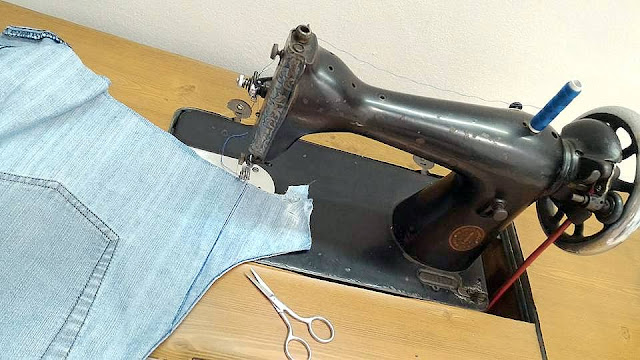 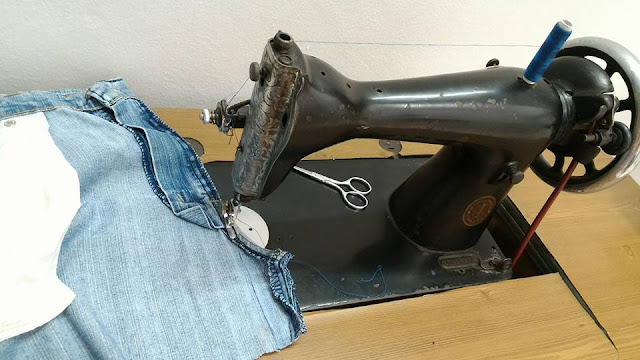 The photos above shows how I sew the parts of the pants to make it even on both sides. 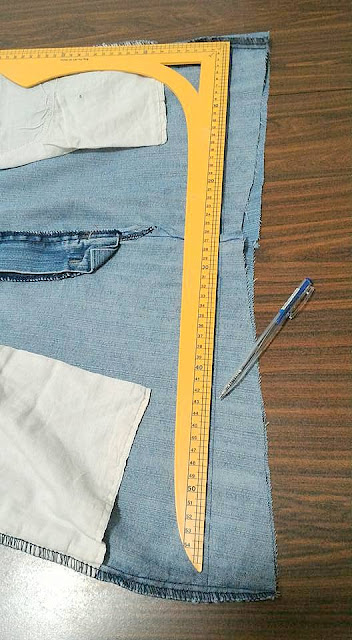 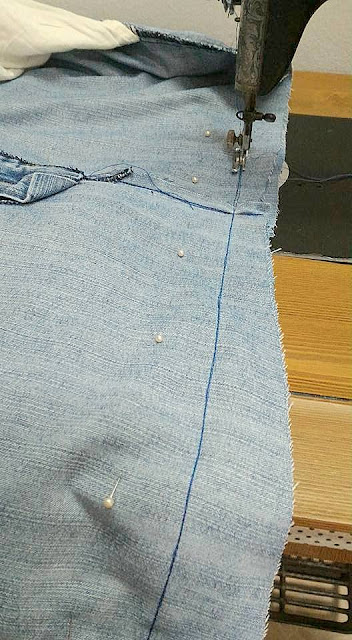 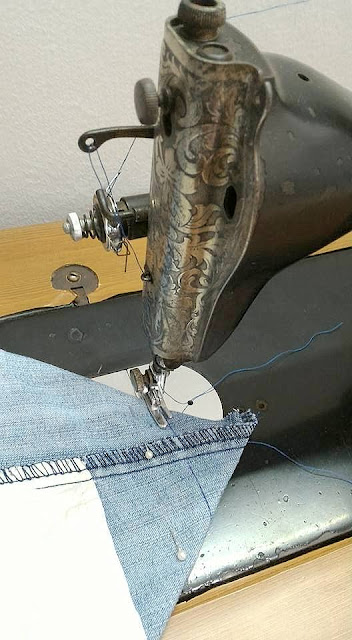 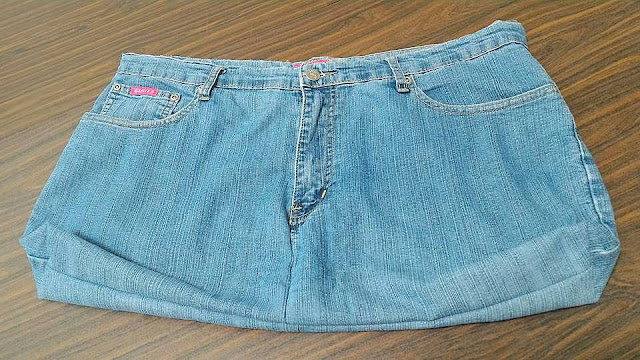 Then I would measure the length of the bag, make a line and sew from one end to the other and cut off the extra. Now the jeans looks like a bag but not quite yet because I need to sew both ends at the bottom so that it will give the bag some space inside. Otherwise it will look flat. Now all that is left is to sew the lining and later make the handles. 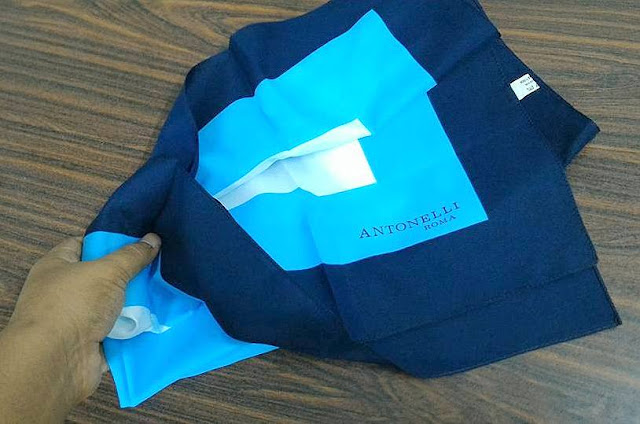 I searched for old fabrics in the store and I found this old square scarf that I owned many years ago.....to be exact, I wore it when I was 17 years old!!! It's a very old scarf!! LOL! Surprisingly it's still in good condition!! Maybe because I rarely wore it back then. So I decided to use it for the lining of the bag. 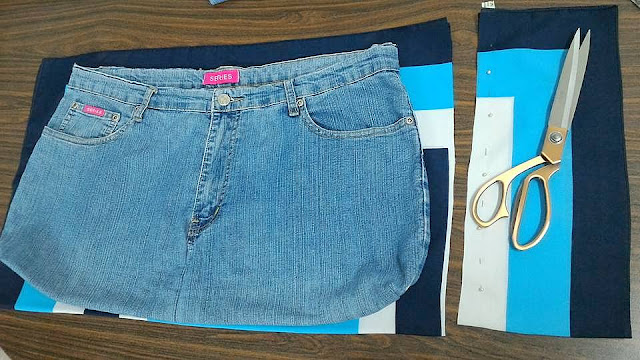 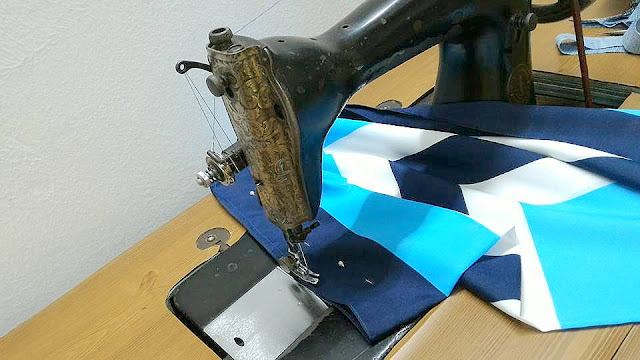 No fancy lining for the bag.....I just cut the enough of it for the bag and sew. I didn't make any pockets for the bag on the inside either because the material of the scarf is a bit thin. If it was cotton, it would be more suitable. I totally forgot to take photos of how I sew the handles!! Yikes!! But I did take photo of the early part where I show which part of the jeans that I used to make the handles. 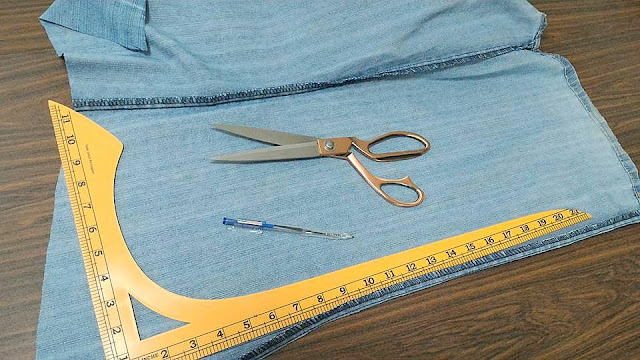 This is the part! I used the whole length of the leg for the handles. I tried to make it as long as possible. If it's too short I won't be able to hang the bag on my shoulders. For the handles, I sew them using the sewing machine as it is faster and neater. It didn't take that long to sew them. It's very easy. 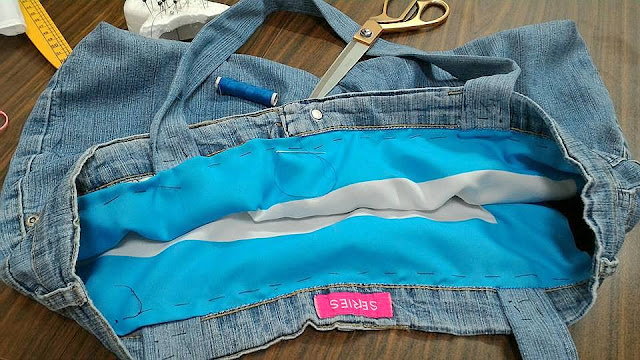 As you can see from the photo above, that's what the handles look like and I sew the handles and the lining at the same time inside the bag. I had to hand sew them because the top part of the jeans had some metal studs that were in the way. If I used the machine, it might break the needle. So to be safe, I decided to hand sew them instead. I did the best I can to make sure the sewing is neat and strong enough, especially for the handles, because it's a big bag. The sewing needs to be done properly or not the handle may not withstand the weight of the bag if I put a lot of stuff in it. 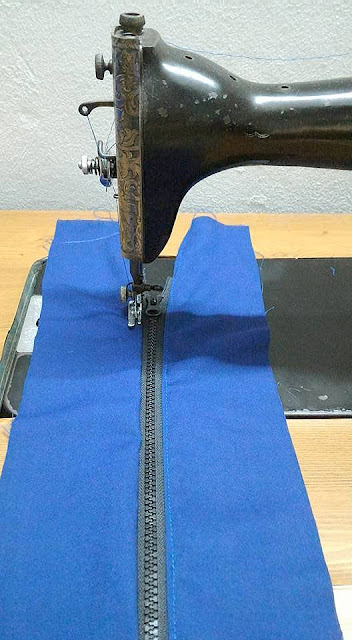 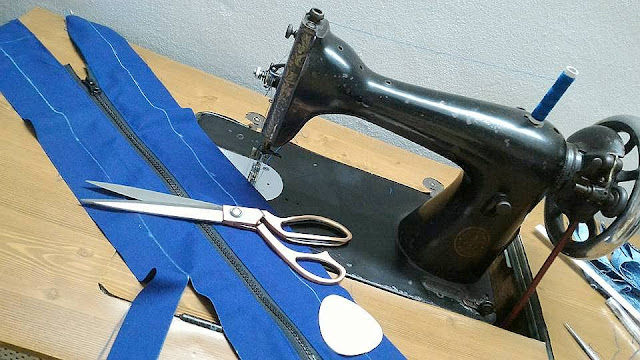 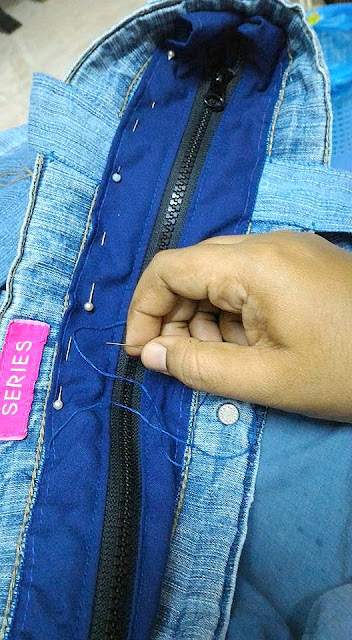 After I finished sewing the lining of the bag and the handles, I proceeded sewing the zipper. It took me some time to find the right zipper for the bag in Alor Setar. There's not a lot of options here for zippers. But fortunately I found one that I really love and it's suitable for a jeans bag. It's actually not meant for bags, but it's for a jacket!! But I really love it because it's so smooth when I open and close the zipper. And the best part is that it has the length that I was looking for!! Yay!! It's so difficult to find a zipper that I wanted. Sometimes I like the design but it didn't have the right length or visa versa. So this jacket zipper was perfect!!!

The first part of sewing the zip was done using the sewing machine and the final part was hand sewn. I also had to sew the end part of the zipper because as you all know, zippers for jackets don't have a stopper. So if I didn't sew the end part of it, the zipper will come off if you accidentally open it all the way to the end. Luckily that is not a difficult thing for me to solve. Just sewing it at the end solved the problem. So that's the end of the sewing project!!

In the beginning, I thought of decorating the bag with laces or some beads and buttons. Funny how in the end I prefer the bag to be left plain as it is....simple. Maybe because I myself am a very simple and practical person. I always look for function and practicality in anything. The beauty always comes second. Hope to make more handmade bags in future. It's so much fun to wear something that I make myself. :)